Out of Darkness, Shining Light

Petina Gappah is a Zimbabwean lawyer and writer, whose debut story collection An Elegy for Easterly won the Guardian First Book prize in 2009.  Her new novel Out of Darkness, Shining Light tells the story of the body of the explorer David Livingstone and the sixty-nine men and women who carried his remains for 1,500 miles to the coast so that he could be buried in his own country.  It has already been hailed as one of the books of the year and we can’t wait to hear more.

‘An incredible and important book by a masterful writer’ Yaa Gyasi

Petina will be in conversation with Maya Jaggi, the award-winning cultural journalist and critic who writes on global literature and art for the Financial Times, New York Review of Books and Guardian Review, and was formerly on the staff of the Guardian. She is artistic director of Sea of Stories on the Gulf of Poets, a summer talks series in Liguria, and Critic at Large for Words Without Borders in New York. 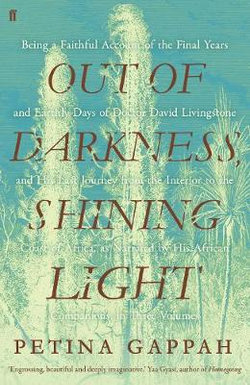 You can still buy a signed copy of Petina Gappah’s Out of Darkness, Shining Light below.

Please note - the book will not be dispatched until after the event has taken place.